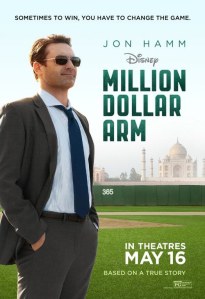 Million Dollar Arm is the true story[1] of a sports agent, JB, who goes to the previously untapped market of India to scout new baseball pitching talent.  He finds two young athletes who have never before played baseball, brings them to America and within a year they are recruited to play for the majors.  It’s an inspiring underdog story of hope; it’s based on a true story; it’s family friendly….in my book that makes it pretty fantastic.

This movie provides a great opportunity for families to talk about what it’s like to live in other countries.  Dinesh and Rinku come from small villages in India.  They are poor and would have never had the opportunity to leave their village, much less travel to America.  As JB travels the country, he gets to see the way the local Indians live, and the men working alongside him do a lot to help him (and audiences) understand what life is really like there.  When Dinesh and Rinku come to America, their lives change dramatically.  They have more opportunity, but there are also things that they miss from home.  Million Dollar Arm is a great opportunity, not only to see life in another country, but also to see American life through the eyes of someone else.

The parents of Dinesh and Rinku had to make a huge sacrifice to let their boys to go America.  It was risky.  They were sending their sons off with someone they didn’t know, to a country they didn’t know.  They couldn’t afford to visit.  They couldn’t bring their sons home if something went wrong.  They didn’t know if or when they would ever see their boys again.  They also were losing someone they depended on to help them family in various ways.  Yet, they made the sacrifice.  Why?  Because this opportunity was something they would never have again.  They knew it was the only hope for their boys to ever change their lives.

This story is as much about JB as it is about the boys from India.  They may have matured as they came to a new country and learned how to play ball, but the person who really matured was JB.  He had been a high rolling socialite agent.  His whole life was selfish and focused on image and impressing others—parties, women, fancy cars…stuff, stuff, stuff.   When he went to India, it was his last straw.  His business was in the tank and he was about to lose everything.  This was a good thing because it meant he was finally desperate enough to be teachable and humble.  When he had to bring those two boys and their translator into his home, he was forced to make some changes.  When his future was all riding on their success, he was forced to give up the high-roller life style and his selfish ways and focus on their needs instead.  And that was life-changing for JB.  In the end, he realized that life was richer and more fulfilling when he loved other people more than himself.

Amit, the adorable translator/wannabe-baseball-coach gave a great, inspirational speech to the boys before their major league try-out.  “All my life I wanted to be a ball player.  It’s a great sport, but I never dreamt it was possible.  YOU are real baseball players. Now small boys in India can dream to be like you.  Let’s go make JB and your families proud.  Hey brothers, I’m seeing my dreams in you.  Your victory, my victory.  Rock it brothers!”  He wanted those boys to know that their lives were going to bring home to millions of boys in India.  They were proof that dreams could come true and that someone could rise above their life in the village.  Amit may not have been able to play baseball himself, but seeing Dinesh and Rinku do it was still a fulfillment of his dreams.  So much so that he felt that if they had victory, so did he.

We rarely realize how much our lives impact others, but they do.  It was important for Dinesh and Rinku to do well, not only for their own sake, but for the sake of little boys across India, and beyond.  In fact, because of their success, kids across the world are now watching their story and being inspired and finding hope.   We never really know what the extent of the impact of our lives might be.  But we can learn from Dinesh and Rinku that if we live well, our lives can bring hope to others and our impact may well go beyond our wildest dreams.  So, we need to live lives of excellence and humility.  “Therefore, since we are surrounded by such a great cloud of witnesses, let us throw off everything that hinders and the sin that so easily entangles. And let us run with perseverance the race marked out for us,” Hebrews 12:1.

[1] Inspired by a true story, anyway.