I read these words today:

Richard Wurmbrand…suffered abominably at the hands of the communists for over two decades in prison. I have never seen a more gracious, kind or happier man. That meeting still profoundly affects me years later. Richard knew God.

I have been privileged to speak to several such people. They all have one thing in common – a sense of wonder and joy in the Lord. They never saw prison as a punishment, only as an opportunity to work in a parish nobody else wanted. One such ex-prisoner told me, “If your freedom is truly internal, then you are free no matter where you are or what is happening.”

These people walked through their fiery trial with their innocence and purity enlarged, not diminished.[1]

I’ve read Richard Wurmbrand’s biography, Tortured for Christ (if you haven’t read it, you can get it free at Voice of the Martyr’s website, you’ll be glad you did!), and I read the monthly newsletters from Voice of the Martyrs—the organization he founded. I see that joyous quality Graham Cooke writes about. I see that their innocence and purity seem to grow with their trials, when so many of us become jaded and bitter by ours.

Laura Hillenbrand wrote of a similar spirit in Louis Zamperini in the book Unbroken (the movie will be released Dec 25, 2014). After being lost at sea for a record breaking duration, and then tortured as a prisoner of war for two years in Japan, Louis found Jesus. Until then he had been angry, bitter, full of hate and suffered PTSD among other things, but with Jesus, all of that changed. He forgave his captors. He never had another of the nightmares which had haunted him previously. He immediately quit drinking. He started sharing the love of Jesus with his former captors, people around the world and troubled young boys as he had been.

He may not have gone through his trials with joy in the way that Richard Wurmbrand did, but when he came to know Jesus, he saw his past through new eyes. Instead of seeing it as wasted time, he saw God’s ability to work all things to good. Joy, innocence and purity became trademarks of his life. He took up skateboarding in his sixties! For some reason, that random factoid symbolized for me the joyful purity that encapsulated his life. 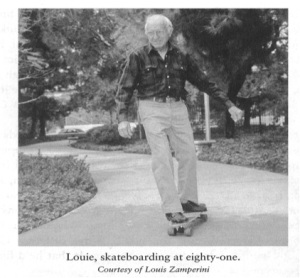 Hillenbrand writes, “He remained infectiously, incorrigibly cheerful. He once told a friend that the last time he could remember being angry was some forty years before. His conviction that everything happened for a reason, and would come to good, gave him a laughing equanimity even in hard times.”[2] I cannot imagine that kind of joy. To be transparent with you, I’ve been angry for no good reason the better part of the last three days. I can’t imagine not being angry for forty years!!! Can’t imagine it.

Louis, Richard, the people in Voice of the Martyr’s…they all know—that kind of knowing that is a conviction, not just a feeling—that “everything happens for a reason and will come to good.” And because they know this, believe this, choose to cling to this, they can “walk through their fiery trials with their innocence and purity enlarged.” They can avoid being angry and bitter at the injustice done to them. Instead of being angry, instead of feeling like their situation is a punishment or an unfair occurrence, they see it as “an opportunity to work in a parish nobody else wants”.

What if we saw every inconvenience, every undesirable aspect of our life as an opportunity like that? What if we saw that it was just an opportunity to minister in a parish that was neglected? I ask you, what is the undesirable parish you find yourself in? Is it your job? Is it where you live? Is it your singleness or even your marriage? Your school? Maybe it’s not your choice, but it what if it was God’s choice for you? What if he was entrusting you with something which He cared greatly for—something which was previously being neglected? What if this place which you think so little of is actually his great honor bestowed upon you? How different would it be if we saw our “undesirable parish” like that?

Whatever the fiery trial you are facing, let us determine to look for the place of ministry God may have for us in it. Let us determine not to let anger, bitterness or disappointment take root, but instead to let our sense of purity, innocence and wonder grow.