In September theaters will release the movie version of Ransom Riggs’ book, Miss Peregrine’s Home for Peculiar Children. I thought I’d give a little head’s up on the story line and a few ways to think about the book/trilogy for those who are reading it before the movie hits the screens. 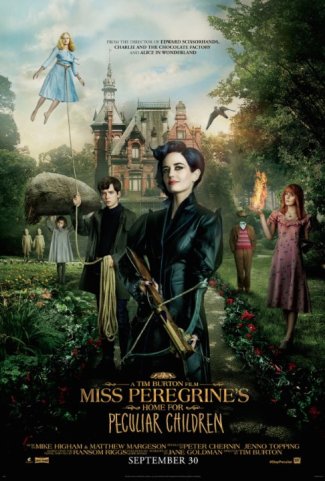 The story is an interesting concept. It’s one I’ve picked up in the book stores out of sheer curiosity countless times. What is this? Is it fiction? Is it true stories? The book is curious, peculiar, I should say. It is filled with antique pictures, which is why I was wondering if maybe it was a collection of stories from a group home of special needs or some such. It is not. It’s fiction. BUT, and this is where the writer in me was really intrigued with the making of this story, the story was inspired by odd old photographs. Riggs collected unusual pictures and then wrote a story to explain and connect them.

Jacob’s grandfather told him these crazy tales about supernatural adventures and people with extraordinary “peculiar” abilities. The general consensus among the family, however, was that his grandfather was crazy. Jacob loved the stories and his grandfather, but he didn’t believe the stories were real—they were too amazing to be real. After his grandfather died, Jacob went in search of answers and closure. He needed to understand his grandfather (and his mysterious death). It led him to his grandfather’s childhood group home…and to the very peculiar people he had thought were fiction. Not only did he learn that the stories were true, but he realized that he, too, had a part in the story. There was a much bigger, more important story going on in the world than the one he had been living so far. There was a fierce battle going on over good and evil and people’s souls, and Jacob was needed, desperately in the fight.

Not only was the more going on in the world around him than he knew, but HE was more than he knew, too. He wasn’t just an ordinary boy, rather, he had unusual, peculiar¸ abilities. He had talents and gifts that were unique and needed. He had sensed those gifts when he was younger, but he didn’t understand them. His parents didn’t understand them. Those gifts were squashed because they only made sense in the light of the larger battle in the world. Since the people around him didn’t believe in the unusual, supernatural world around them, they didn’t believe in his gifts.

Jacob’s gift was that he could see the supernatural. He could see the invisible enemy. You can imagine how that might have made him seem crazy to people who didn’t believe in the invisible world. He would see evil creatures as a child and that would terrify him. Parents and doctors thought he needed medication. They thought he had mental problems, etc. Rather than recognizing that it was a skill that was needed and deserved to be strengthened and honed, they tried to stop it.

When he met the peculiar people, however, people who did believe in the battle and the evil they couldn’t see, they saw his gift for what it was. They helped him understand himself and his role in the world. They affirmed his gifts and helped him develop them.

Anyone who has read John Eldredge’s Waking the Dead will recognize some themes here. Jacob’s story is our story. We are living in this world but it’s not the whole story. There is a greater battle going on, a world beyond our world, but part of our world. (12 For we do not wrestle against flesh and blood, but against the rulers, against the authorities, against the cosmic powers over this present darkness, against the spiritual forces of evil in the heavenly places—Ephesians 6:12.) And many don’t believe in this cosmic battle.

We all have special gifts for the battle. Some of those gifts seem more “usual” than others, like kindness, for example. There are other gifts though, gifts that seem more “peculiar” and/or spectacular. Like the gift of healing or prophecy… and even the gift of discerning spirits, like Jacob had. There are people who are very sensitive and aware of the hearts and souls of people. They see where there is good in someone who may seem, on the outside, to be bad. And they see where there is evil, even in someone who might seem to be good. (Jacob showed this ability, learning to see the spark of life and humanity in the “hollows,” evil beings who were hunting them, and he had compassion on them, just as he saw through deception in “good” people who were hollows in disguise.)

I had a friend who shared with me that when He became a Christian God gave him the gift of discernment. But, since he’d never heard of the gifts of the Spirit, he didn’t know what it was. He just thought he “had a super power.” People who ask him how he knew things and he would say, “I have a super power!—I can read people’s minds.” He didn’t know where it came from or why he had it. He didn’t know of any other people with super powers, but he recognized that he had one, for some reason. As he grew in the Lord and started to meet other Christians, it was like Jacob meeting other peculiar people—he began to realize that God had given him a super power, the power of discernment, just as He had given other people gifts of service and love and hospitality and healing, etc. He also learned, from being around other Christians, how to develop and hone his gift. He learned how it could be used to the glory of God and the good of His Kingdom.

So, to recap: there’s more to the story than what we see, and we have gifts and abilities that are given specifically to us. When we recognize that there’s another world, another, larger story going on around us and that it involves a serious battle, we begin to realize the reason we have those unusual gifts and abilities—they are for us to use in the battle. We are needed. Our skills are needed. We need our skills and we need to develop them and strengthen them, for the good of the Kingdom and for our own protection in the war we are about to enter. It’s all very exciting! Jacob had always thought he was average and his life ordinary. He was actually overjoyed to discover he was peculiar, extraordinary even, and his life mattered. Jacob’s story is ours!

This applies to everyone, but I want to just pause a second to recognize the Jacob’s in the world—those specifically with the gift of discerning of spirits. It was scary for Jacob, seeing the darkness that was present. It was scary for others, like his parents, who didn’t see what he saw. They thought he was crazy. Understandably so…it’s a difficult gift to recognize or validate, especially by those who don’t have that gift of seeing. I don’t have an easy solution, or a test to know if someone is crazy or if they are seeing what others can’t see. I do want to offer a word of caution though that we aren’t too hasty to discourage what we don’t understand. Sometimes the greatest and most powerful gifts (and people) are those we least understand. It’s hard to nurture what we don’t see, get or understand… but that doesn’t mean it’s impossible. Maybe the singular fact that we don’t understand something should give us pause to be delicate and cautious lest we either hurt it or be hurt by it.

While I’m on the subject, I want to take a quick moment to draw attention to a couple of powerful images in the third book in the trilogy: Library of Souls.

“We could either wait and hope they went away, or open the door and deal with them. The latter option was braver and faster, so I summoned New Jacob and told him we were going to throw open the door and fight, and to please not discuss the matter with Old Jacob, who inevitably would whine and resist.”

The Bible says that when we become Christians, we become new creations. The problem is, we are often still dealing with our old selves instead of dealing with our new selves. We need to take some advice from Jacob and start speaking to our new selves, to the selves we are becoming and God is making us. When we do that, we are agreeing with what God is doing in us. When, however, we speak to our old selves, the people we used to be, we deny Christ’s work in us and we keep on encouraging and speaking to life to something Christ put to death. We are either speaking our new selves into existence, calling them forth, or we are rehydrating and reanimating our old, dead selves.